The composition mechanism integrated in AF3’s kernel aims at improving the reusability of both layouts and controllers and reduce the overall complexity of user interface development through modularity.

Complex user interfaces can be hierarchically decomposed into smaller, reusable views w.r.t. both layout and logic. This is achieved by allowing each view to define containers where sub-views can be inserted. This way repeating UI elements can be defined once, and reused wherever needed.

Each view refers to its own FXML layout file and implements the controller logic for the interface elements it defines. This way not only the layout can be reused, but - most notably - the view’s logic as well. 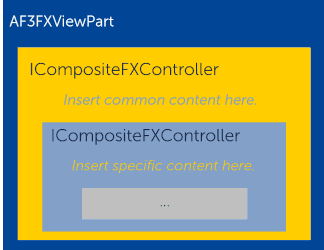 The illustration also captures how the hierarchic controllers are integrated with AutoFOCUS 3: As ICompositeFXController s can - and should be - reused in multiple views, they cannot be used to uniquely identify a single view. Thus, for AF3 to reference all views within plugin.xml files, an almost empty class deriving from AF3FXViewPart is created for each of them. It contains nothing but a constructor with no parameters, passing an instance of the top-most ICompositeFXController to the super constructor.

This presentation includes a more comprehensive explanation of the composition framework and how it is applied: AF3 JavaFX Composites

With the loading logic taken care of, just follow these steps to create a new view within AF3:

If you don’t want to follow along step-by-step, here are the FXML and Java files for the following examples:

Let’s say hello to the world.

* note that the same gui can be created in any other plugin and package as long as it can access the org.fortiss.tooling.common.ui kernel plugin. however, in the second part of this example we will use another view defined in the org.fortiss.af3.exploration.ui. thus, it is recommended to create the view in the same plugin so as to keep things as straightforward as possible in this example.

you have decided that you want to add your “hello world” to the dse view, with the same frame containing the “back” and the “help” buttons. here comes the magic:

let’s get some action going.

you like greetings but want something more? your fancy some buttons? luckily, we’ve got you covered:

JavaFX is a GUI framework and toolkit that allows building GUIs with less effort compared to SWT. GUIs can be created programmatically or using a layout files in combination with a controller class that is programmed in Java.

The integration of JavaFX in AutoFOCUS 3 (AF3) is achieved by using the e(fx)clipse plugins developed as an Eclipse project led by Thomas Schindl.

How to set up the SceneBuilder

When installing AF3, the platform integration is already shipped. However, you may want to install the SceneBuilder to work with FXML layout files to build complex GUIs.

If the above procedure is followed, no errors should appear. However, there are typical error patterns which may be hard to debug, but whose cause is easy to identify using the indicators listed in the following. Most of them are easy to identify by systematically placing breakpoints in the controller class. Use the following items also as instruction to perform systematic debugging!